At the start of last week, I thought I would plan a weekend day trip for Ryno and me. I decided we would finally go to the San Antonio Zoo, and I asked friends for restaurant suggestions in the area. I mentioned my plan to him Thursday, and he was on board for a short, fun trip to see more of San Antonio. The drive down was easy and we quickly arrived at our destination. However, the phone GPS turned out not to be as clever as we thought. When it chimed to say we arrived at our destination we were in the middle of a residential street Northwest of downtown. After I insisted that Ryno drive around the block to ensure it wasn't just hidden in the neighborhood somewhere, we pulled out our phones and looked more closely at the map. It was at this point that we found the marker for the San Antonio Zoo Northeast of downtown, so we had to jump back on the interstate and headed back the other direction. Once we finally arrived at the park, we waited in traffic for almost an hour driving slowly through the park passing completely full parking lots. By the time we made it to the road infront of the zoo gates Ryno and I agreed we needed to pick another activity for the day and plan better the next time we wanted to make the trip.

The alternative plan we agreed upon was the San Antonio Botanical Gardens. It was in close proximity to the zoo and we were correct in assuming it would be less crowded. Overall, the gardens weren't as large as I remembered, Ryno was quick to point out I was smaller when I was five. I would say they only had a handful of true gardens and the other areas represented the different regions of Texas and the landscapes in each. I think our favorite part was probably the shrubs that were blooming with very yellow pods. 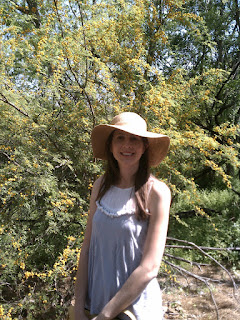 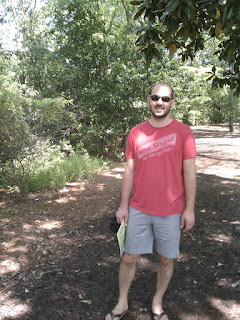